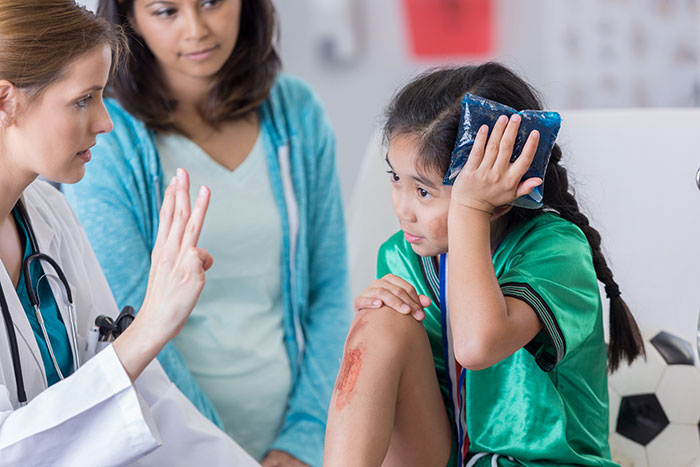 Concussions are more widespread than you think.

In 2013, almost 330,000 children aged 19 or younger were treated for a sports-related concussion or traumatic brain injury (TBI) in the United States, according to the CDC.

But, that number only includes diagnosed cases; the real number of injured kids may be 50 to 75 percent higher.  Most are not reported, says Dr. Juan Solano, a TBI specialist with the University of Miami Health System.

A concussion is caused by a bump, blow or jolt to the body, with a force transmitted to the head, causing an injury to the brain. Because kids are not fully physically developed, they have thinner skulls and weaker neck muscles. This makes them more susceptible to concussions.

Although they are also referred to as a “mild” TBI, all concussions are serious and if not treated properly can lead to permanent damage or even death. A potential concussion needs to be assessed immediately.

Contrary to what you may see on movies and TV shows, most incidents that cause concussions don’t tend to be overly dramatic and rarely result in the victim passing out or losing consciousness.

In reality, the symptoms may be as simple as a general feeling of being unwell or “down.”  Some concussed patients may not display symptoms for hours or days after the head injury.  Before your child plays sports, they should understand how important it is to tell an adult usually a coach or parent about hitting their head – even if they feel fine.

They should also be aware of these potential symptoms and know how to communicate them to an adult.

Many people don’t consider that after a concussion you must rest both your body and mind.  Recovering from a concussion is a gradual process and your child may get impatient; however, it is important that you follow the doctor’s instructions.  These might include:

It may take some time for your child to be completely cleared for return to athletics. “Your child may appear fine and try to convince you that they are fine, but we clear them to return to play,” advises Dr. Gillian Hotz, director of the University of Miami Sports Medicine Institute’s concussion program. “Your child must have no symptoms before they can begin the gradual return to play “five step protocol.”

If you suspect a concussion, call 305-243-2074 to make an appointment at the UM Sports Medicine Institute’s concussion program.