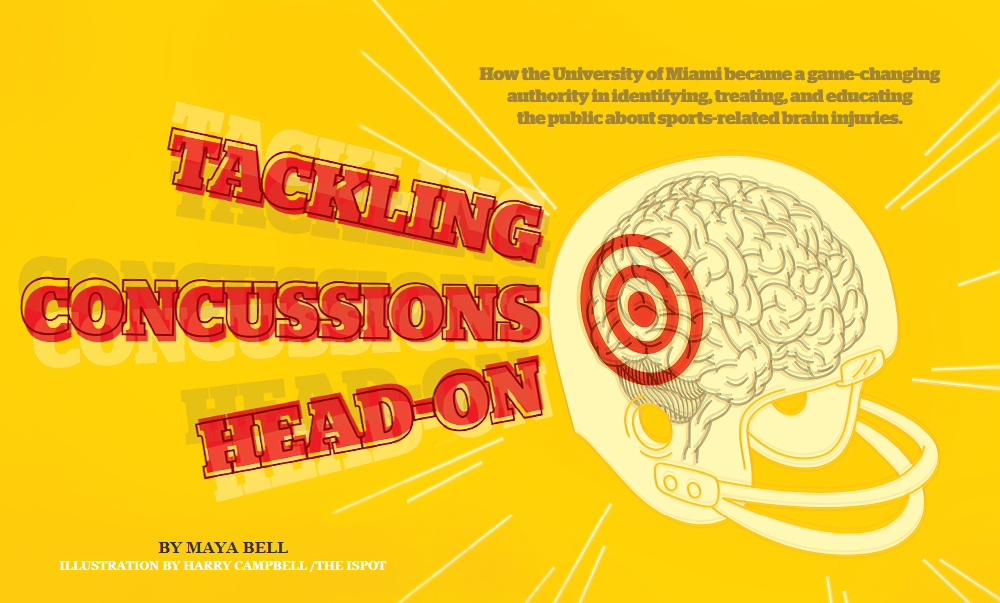 This excerpt is from the article “Tackling Concussions Head-On” featured in the Fall 2017 University of Miami Magazine. Read the complete article here.

“An avid sports fan who grew up in Canada, Gillian Hotz loved the brawling physicality of ice hockey. Yet as a young research neuroscientist who came to the University of Miami in 1992 to study traumatic brain injury at Jackson Memorial Hospital’s new Ryder Trauma Center, she was stunned by her first high school football game. Even sitting up in the stands at Harris Field in Homestead, where the powerhouse Miami Southridge Senior High Spartans played, she was unnerved by the violent, relentless THWACK! of helmet and shoulder pad colliding. “These were big, fast, strong kids, and I couldn’t believe how hard they were hitting each other,” Hotz recalls of that night in 1996 when she accompanied the team doctor, Lee Kaplan, then an orthopedic resident at UM/Jackson, and now director of the University of Miami Sports Medicine Institute, to the game. “And they were doing it again and again. I said to Kaplan, ‘This is crazy! These kids are killing each other.

Not one to ignore a potential health or safety issue, Hotz returned to Jackson and cornered neurologist Kester Nedd, who was the director of neurorehabilitation at Ryder. Hotz urged him to start a clinic for mild traumatic brain injuries—which is what concussions are—for high school and other athletes…”